Lieutenant Colonel Marcellus H Thompson, son-in-law of the US Ambassador in London Harvey and Vice President of the Auto-Ordnance Company of New York,  appeared in the Federal Court in Newark to plead not guilty to an indictment charging him with conspiracy to ship arms to Ireland in violation of neutrality laws. 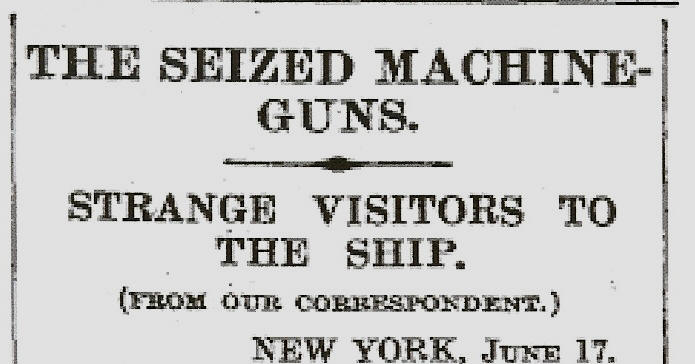 This appearance came on June 19th 1922, one year after 495 examples of his invention the Thompson sub-machine gun were found on board the coal carrying Cosmopolitan Line freighter  East Side en route from New York to Dublin. The ship had been chartered by White Cross (Irish Relief Organisation) to carry coal to Ireland and arrived New York on 8th June 1921. It would have docked in Dublin 27th June.  It was while tied up at Hoboken on June 15 1921 that a crew member became suspicious of a number of heavy sacks being off loaded by launch alongside the ship. When he opened one and saw a gun barrel, he called in the police. 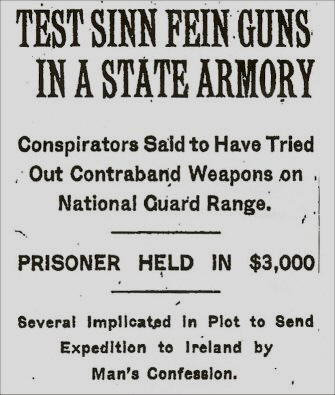 Marcellus Thompson said; “ I do not want to discuss the East Side matter except to say that we do not know how the guns got aboard that ship. We would not think of selling guns to persons we might even suspect of reselling them into the hands of enemies of constitutional governments”.

Contrast these words with those he spoke to his team in December 1920 when sales of his new invention were poor “ See what the Irish crowd think of the gun”.

The guns were described in the press of the time ;

“Thompson sub-machine guns, made by Colt’s Patent Fire Arms Manufacturing Company were the latest development of automatic quick-firing small arms. Guns of this type capable of firing 600 shots a minute recently were acquired by the Riot Squad of the New York Police Department.”

The first Thompson gun had come off the production line end of March 1921 , known as the Model of 1921 with serial number 41. Salesmen travelled Europe demonstrating the weapon but no takers …..the unit price at $225 ($2000 in todays terms) was expensive and even the US Military gave no orders. The US opted for the Lewis machine gun priced at $650 per unit! 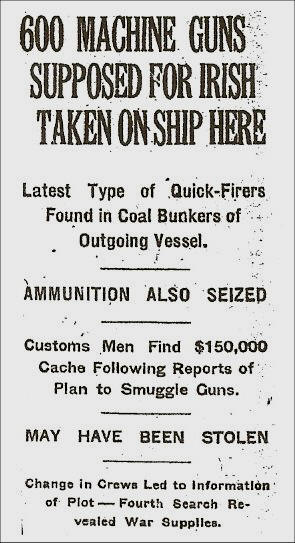 First press reports of the East Side seizure said that the guns together with many varieties of magazines, a small quantity of ammunition and 173 unopened boxes thought to contain small arms were valued at $150,000.

(The IRA had purchased 653 guns at £225 each less discount of 20% making £133034. These funds came from certified cheques from Trustees Reserve of Dail Eireann external loan.)

The original Model of 1921 instruction manuals were also seized with the consignment.

It became necessary to copy and hand write the manuals for the IRA back in Ireland.

The guns were en route to the IRA in Ireland and this news story from when it broke on 17th June 1921 was carried almost daily in the US , British and Irish press. 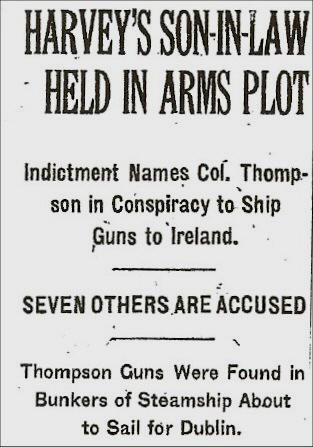 Others indited in the charges and who appeared in court were Frank Merkling (Company Secretary), Frank Williams alias Lawrence DeLacy or Lawrence Pierce who was believed to have paid for the shipment, Fred Williams alias Edward DeLacy and brother of Frank , George Gordon Rorke, a salesman from Washington who was charged with placing orders for the guns, Frank Ochsenriter alos charged with placing orders, John Culhane a truck driver who carted the shipment from a station of the American Railway Express Company to a Bronx warehouse, and a man named Brophy who carted the shipment from the Bronx to the East Side freighter.

In his defence Frank Williams claimed that his guns at the Bronx warehouse had been stolen from him. He said he had stockpiled 600 units and only 495 had been found on the East Side.

“The seized guns, a little more than two feet long, with detachable butts that can be filled to the shoulder, were wicked looking weapons. They can be best described as pistol machine guns, for instead of .33 calibre rifle ammunition their barrels are fitted for .45 calibre ammunition, the same as for pistols served to the United States Army Forces.

A large number of the manufacturers serial numbers on the weapons had been obliterated, but among the serials that could still be deciphered were the numbers 701 and 915, which indicated the small number of guns of this model which had been manufactured…….They can be fired either single shot or on the automatic principle firing at a rate of 1000 shots a minute…..their advantage in Irish street fighting is obvious, when it is recalled that the British Forces in Ireland are equipped with the more bulky Lewis gun, which required a gunner and a loader to operate” 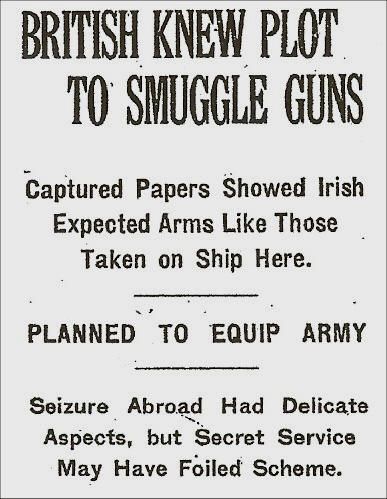 Back in June 1921 after the East Side discovery, the newspapers carried reports that the British Secret Service had received information about the arms plot from a seizure of IRA documents in Dublin during May 1921. The papers bore the handwriting  of Richard Mulcahy, Officer Commanding the IRA and contained details on  deployment of the weapon including a  map. Eighty eight guns were to be used for training purposes (10 to Belfast, and 42 for the others counties in Ulster).

Placing this date in context, it should be remembered  that at this very time the IRA were in negotiations with the British which resulted in a Truce in the War of Independence from July 1921.

The British of course knew all about the ‘new fangled’ Thompson Gun as they had been offered it for military use by Auto-Ordnance.

Interesting fact about the seizure of the East Side shipment – this matter was investigated by a young FBI agent by the name of J. Edgar Hoover.

It also came out in the trial that a target range of the National Guard Armoury (69th Regiment) had been used to test fire the Thompson Gun for the prospective Irish purchasers. (Sean Nunan and Larry DeLacey were present).

This was revealed by one of those charged with neutrality violation in October 1921. John O’Brien was accused of conspiring with others as early as 19th November 1920 to supply ‘British subjects in Ireland’ with arms and munitions and to instruct them in the gun’s use. Further claim was that on 7th April 1921 O’Brien was present at Auto-Ordnance offices in New York when the first 7 Thompson guns were sold to salesman George Gordon Rorke.

George Gordon Rorke (aged 29), Auto-Ordnance salesman,  during the trial admitted that he sold the arms but knew nothing about their destination. He told the court that he was working on a commission basis for Auto-Ordnance and his business was to sell their product. It transpired that Rorke had been under police surveillance. The guns were sold for cash. Rorke told the court that he was sympathetic with the aspirations of the Irish people, had been active in several of the local Irish societies and had been President of the Protestant Friends of Irish Freedom.

He declared that he was of Protestant religion and a Graduate of Georgetown University.

After all the legal wrangling and initial seizure of the East Side Thompson guns in 1921, they were eventually released to Joseph McGarrity of Clann Na Gael in September 1925 after an order of discontinuance was issued.

In 1927 some of these original IRA guns found their way to Ireland in the personal luggage of the famous all-Ireland football  team which visited America.

Not all the guns  made their way to Ireland for the IRA, as eight were later found to be in the hands of Chicago gangsters with Irish connections.

In 1933 US Justice Department reported that some East Side Thompson guns were seized from the underworld and matched the serial numbers recorded at that time.