Thomas Fortune Ryan (died 1928) was an Irish born millionaire and veteran contributor to the Irish Nationalist cause. 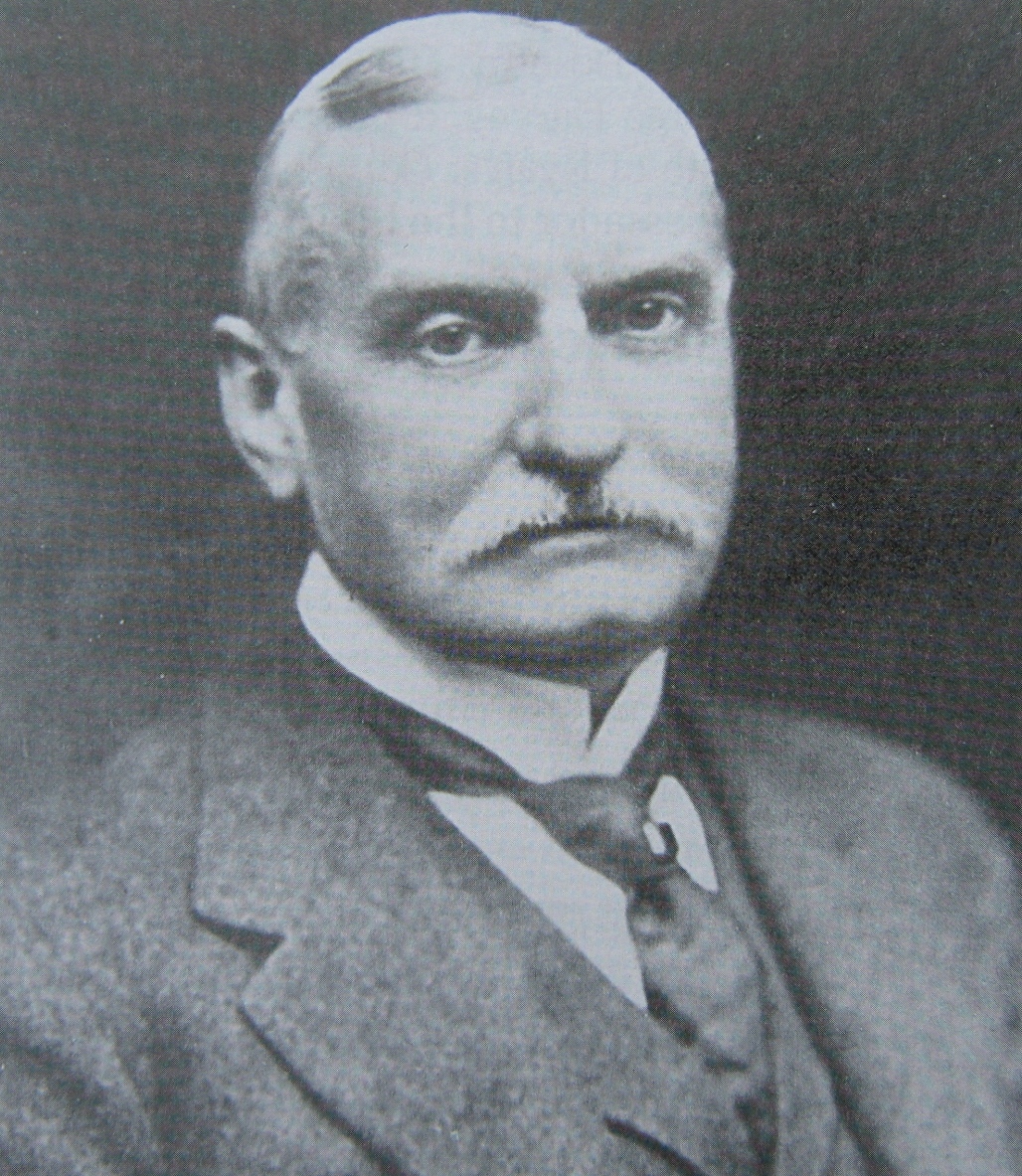 And so it was that an Irishman was the main financial backer of the Auto-Ordnance Company at formation in 1916. He had made his money from tobacco.

Ryan contributed all the research and development funds to get the company which invented the Thompson sub-machine gun, started.

It is widely accepted that he was a member of Clan na Gael and also contributed to the American Committee for Relief in Ireland.

Harry Boland was the senior IRA emissary sent to the United States in June 1919. 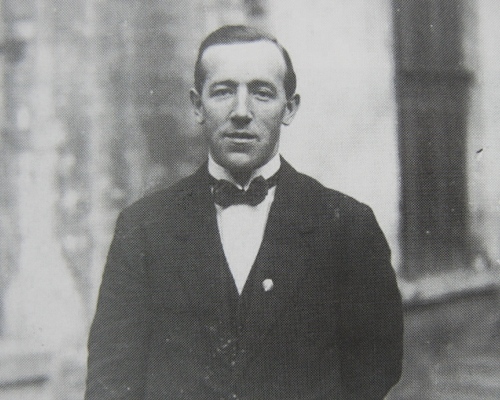 He was an elected member of Dail Eireann , a clever politician and close friend of IRA Director of Intelligence Michael Collins.

There is a reference in Boland’s correspondence dated 20th July 1920 when he was arms hunting in the US to having secured “quotations from G” which is thought to refer to George Gordon Rorke, Auto-Ordnance salesman who was later indicted one year later.

With the Thompson gun’s first demonstration in August 1920 at Camp Perry, Ohio with a prototype firing 1500 rounds a minute, came its first publicity. This weapon fired 2000 rounds with only one stoppage and was truly revolutionary for its time.

By November 1920 Popular Mechanics magazine and Arms and the Man magazine were carrying articles about this ‘new fangled’ gun. 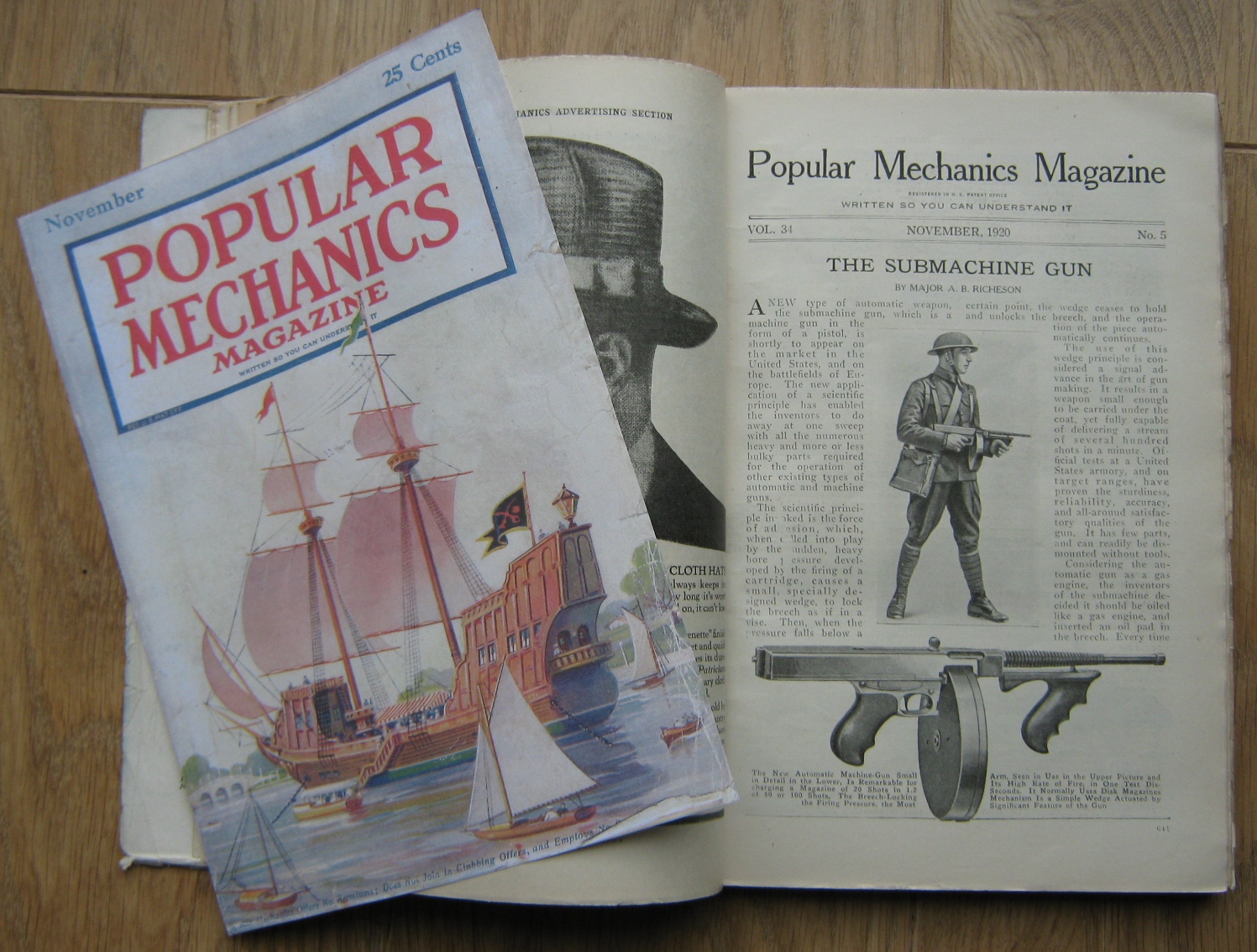 Harry Boland was to read these and sent a note back to Dublin on 10th December 1920 for the attention of Michael Collins including the articles stating that an order had already been placed for 100 guns.

For reference, start of December 1920 saw the first feelers being put out by the British and was the start of the Irish Peace Initiative which resulted in a Truce 8 months later.

The Cork Examiner newspaper in Ireland carried a news piece on 30th December 1920 about the ‘remarkable rifle’.

On 13th January Harry Boland ordered a further 100 guns at $225 a piece. Boland recorded that the gun was ‘a splendid article’.

On 21st February an order placed for another 50 guns. Boland promised Dublin that 150 Thompsons would be delivered by middle of March 1920.

The East Side consignment was ordered on 21st March and consisted 653 guns with 20% discount.

21st April it was reported that 30 guns had landed at Queenstown , Cork.

This is an interesting story for IRA Commander Florrie O’Donoghue recorded that he witnessed 30 Thompson guns in Cork before 26th April 1921. He was sure of the date as he got married that day! He said the guns were packed into a sofa and two chairs which were shipped form the US. Indeed the SS Honolulu steamer left New York with such a furniture consignment addressed to a priest on March 21st . Ship docked Quuenstown April 23rd.

On 12th May it was reported that 3 Thompsons with 3 drum and 12 stick magazines had arrived safely in Dublin. Michael Collins was quoted as being “very glad”

21st May and US Army veterans Major James Dineen and Captain Patrick Cronin arrived in Ireland  from Chicago and with them 2 guns. The two men had departed Chicago with a party on 21st April. They had been sent as arms instructors for the Thompson having seen the gun in action during April at New York firing range. That same day, the British Army captured 13608 rounds of American made .45 ammunition in Ireland.

On 24th May Michael Collins was shown his first ever Thompson which was test fired for him and other IRA senior officers including legendary field commander Tom Barry in a brick lined underground tunnel at Marino in Dublin. They were well impressed. 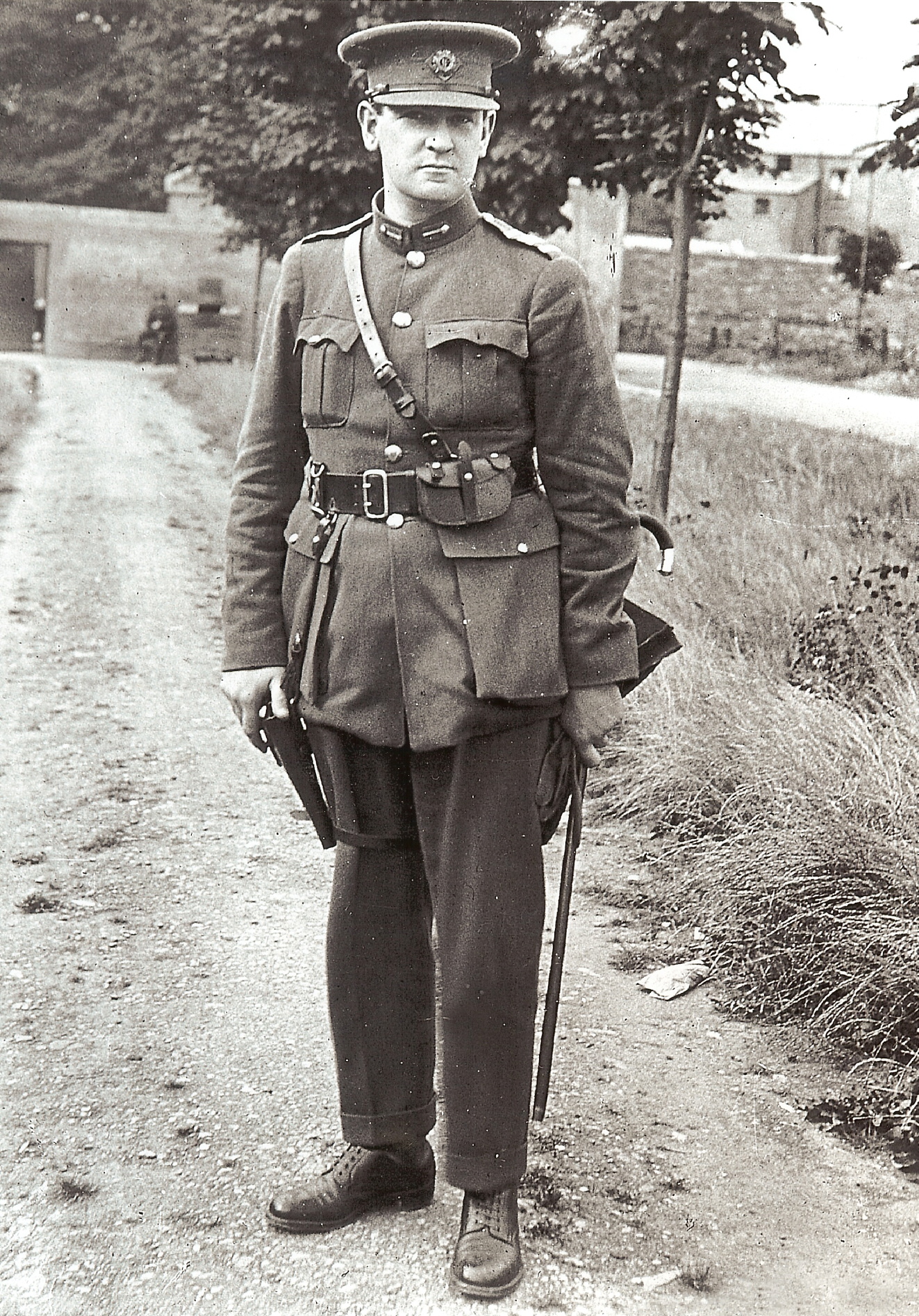 “Thomson (sic) Machine Gun – on 22 May information was received that the rebels were negotiating with a firm in the US for the purchase of sufficient Thomson (sic) machine guns to supply all units. The issue of these guns was frequently reported but definite existence of more than two was never obtained in the Dublin district area. These were used in an ambush against a railway train in Dublin on 16 June”

(Thomson is the English version of the surname Thompson)

16th June the East Side shipment was seized.

Ironically that same day, the Thompson was first used in combat anywhere when the IRA brought it to bear to ambush British troops of the West Kent Regiment at Drumcondra railway station in Dublin. Three soldiers were wounded, one seriously. It was reported that due to inexperience, one gun jammed and two were used along with grenades and pistols. 60 rounds were fired.

21st June 1921 reported that 51 Thompsons had been landed in Ireland. 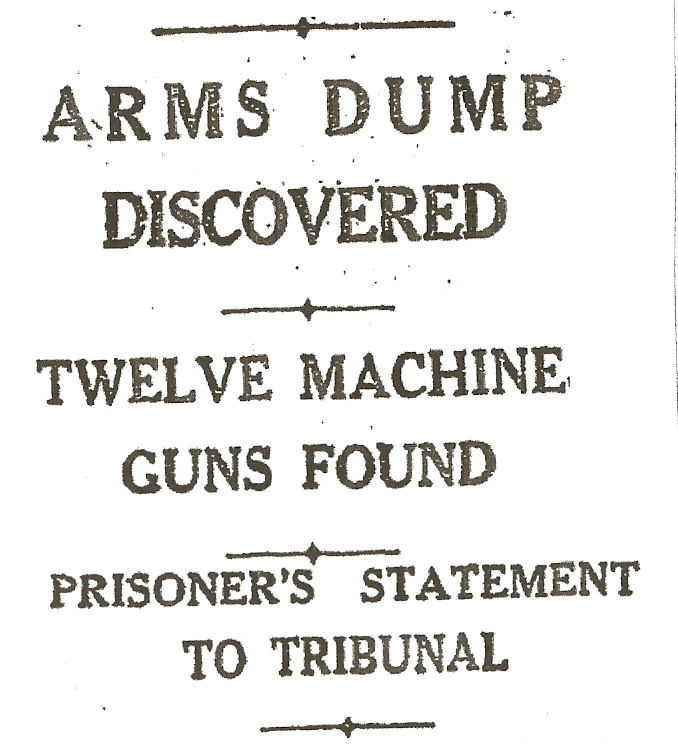 These reports are interesting since by this time there was a well established arms route from America through Liverpool on the SS Baltic and SS Celtic. The code name for the courier at this time was a Mister Rees.

7th June four Thompsons were sent from Liverpool  having arrived on the transatlantic ships by Q Company who were based in the English city.

For reference, the Truce was agreed on 11th July between the British and the IRA.

The Truce freed up Customs restrictions and shipments of all types of arms and ammunition, including Thompsons , continued apace. 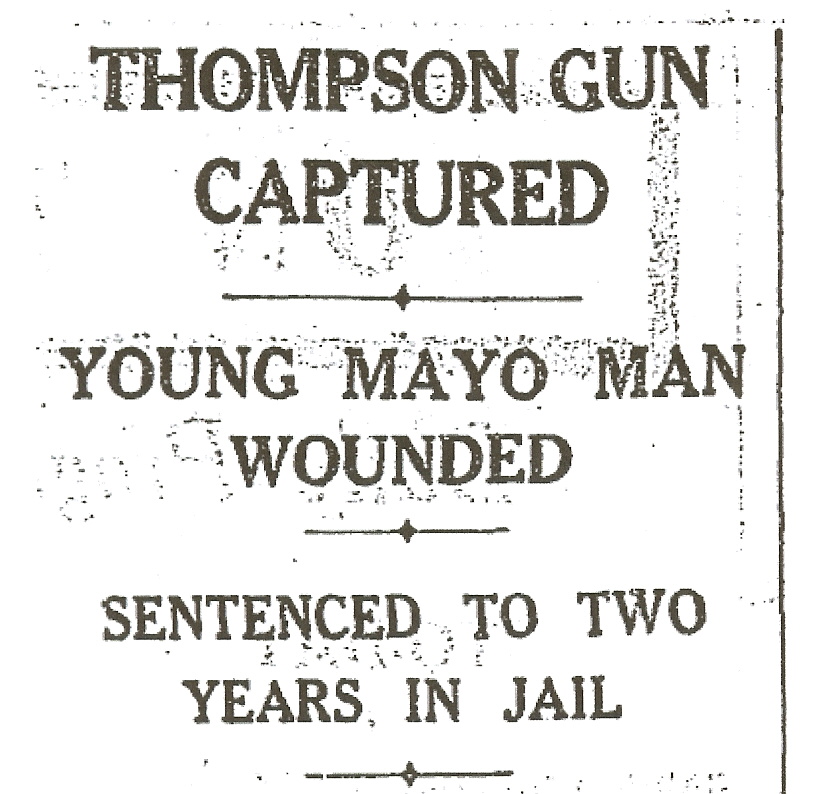 By 31st October, the IRA are reporting 49 Thompsons in service – 14 in Southern Brigade area, 9 with Western units, 26 with Northern and Eastern Brigades and 7 in Dublin city.

For comparison, that same report recorded 7 Lewis and 5 Hotchkiss guns available to them.

At a well publicised IRA training camp in Autumn 1921, volunteers were shown how to use the Thompson gun. The IRA had only 100 rounds per weapon to hand, and maintenance was poor. Due to the official Auto-Ordnance instruction manuals being lost on the East Side seizure, the training was done from hand written copies.

The IRA recorded that they were only receiving 800 rounds of .45 calibre per week from America for their Thompsons.

27th November 1921 and British Customs officers found 10 Thompsons onboard the SS Baltic at Liverpool docks.  This important arms find at a time of the Truce and critical political negotiations between the IRA and the British, did not make the headlines and the Treaty was signed some days later in London.

Belfast IRA leader Denis McCullough was released from captivity at Ballykinlar Camp on December 21st and shown his first Thompson, he recalled.

Belfast Brigade had 5 in its arsenal at that time.

Throughout 1922 with the Irish Civil War and into 1923 , Thompsons were still arriving steadily.

For reference, the Irish Civil was ended in May 1923.

In October 1923, Thompson guns were still arriving via Liverpool and the liners route. 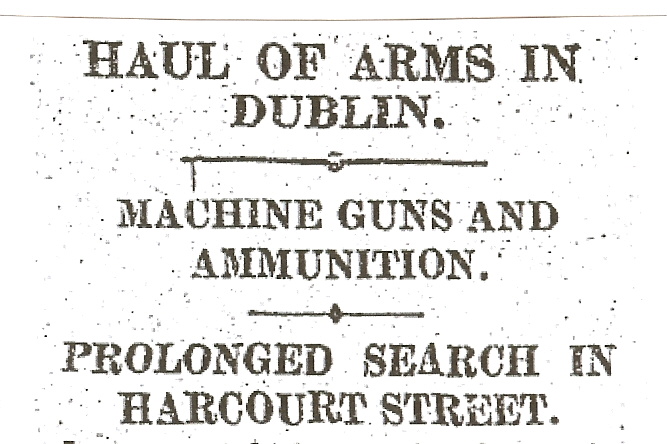 The Thompson Gun stood out as a lasting symbol of Irish resistance since 1921 and is immortalised in the well known ballad “The Merry Ploughboy”.

where the helmets glisten in the sun,

where the bayonets flash and the rifles crash,

To the echo of the Thompson Gun.”

General Liam Lynch was Chief of Staff, IRA Headquarters (Executive) based at Four Courts Dublin and was head of the anti-Treaty forces.

On 26th April 1922 weeks before the Civil War broke out in Dublin, Lynch broke his silence to repudiate the claims of the pro-Treaty forces of the Free State, that they had done everything in their power for unity within the IRA and that he had not organised arms for the IRA in Northern Ireland.  In his statement to the Press, he added that arms had been gathered up to send urgently to IRA units in the Northern Ireland area (on the orders of pro-Treaty General Michael Collins). Included in this consignment were 30 Thompson guns with 8,000 rounds of .45 ammunition for them and 10,000 rounds of ammunition .303 plus 75 SMLE rifles. Lynch stated that he complied with the request for the arms exchange and actually included 10 trained machine gunners. All were delivered to Beggars Bush barracks but the consignment never went North to the IRA units. The gunners waited at the Barracks for one week and were then dismissed.

The Collins plan was to bolster the beleaguered IRA in N.Ireland with fresh supplies of arms and ammunition but these weapons were to come from the anti-Treaty side so that they could not be traced by the British. The Provisional Government of the pro-Treaty side would make good the guns to the anti-Treaty side by way of exchange.

At the outbreak of the Second World War, the Irish Army recorded having 21 Thompson guns available. They received another 99 in 1942   which may have been from the IRA arms dump uncovered in Mayo, and ‘bought’ another 3 Thompsons in 1943. Compare this weapon with stocks of 823 Lewis guns, 14 Bergmann, 253 Bren guns, 508 Vickers, 244 Hotchkiss guns, 42413 SMLE rifles and 19971 American (P17) .30 rifles. Interestingly stocks of ammunition showed .45ACP rounds listed as for Thompson Guns ran to 1.5 million rounds and 440,000 rounds of 9mm listed as for Bergmann !

“Fuses and guns in debris” ran the headline when a large bomb under preparation exploded inside a small cottage at Edentubber on the border of Counties Armagh and Louth on 11th November 1957. Five men were killed of which four were IRA volunteers. When police arrived they found carnage, destruction and the remnants of four Thompson guns, rifles, pistols, loaded magazines. The news report reported;”Bicycles were found in the debris and a Thompson sub-machine gun was still tied by string to one of the crossbars”.

Maria McGuire was an IRA volunteer who became one of the first during the recent phase of troubles in Northern Ireland recorded her experiences in a book.

“Most of the weapons were World War II military rifles such as the M1 carbine, the heavy Garand semi-automatic rifle (it weighs 12 pounds) , bolt action Springfields and British Lee-Enfields…….The rest were assorted pistols of vastly differing types and calibres, plus a few sub-machine guns, mostly the famous Thompsons…..most IRA men refer to them as ‘The Thompson’, though some of the younger ones also called them ‘rattleboxes’. They do make an incredible din…..Hundreds of them appear to have been smuggled into the country at around that time (1921) and they rapidly became as much a part of the IRA  legend as the trench coat. Many of the Irish Thompsons have spent more time under the ground than over it….I remember an wizened old man came into Kevin Street and produced various parts of a rusty Thompson gun out of a brown paper parcel ‘tis a present form the boys in Cork’ he said. Many IRA men will tell you that the Thompson is their favourite weapon….one of the major faults with the Thompson is that unless it is kept spotlessly clean (often difficult in combat conditions) it’s prone to jamming; another is that it needs a strong man to handle it, because its barrel should make an imaginary figure of eight around the target; a third is that has a relatively  low velocity and there has been instances in the North of its heavy .45 bullets failing to pierce soldier’s flak jackets….Most of the .45 ammunition fired from Thompsons in the North is manufactured in Sweden”.